Just added to your cart

Twin Cities bakers put their own twist on challah

The pandemic has fueled an increase in demand for challah, and Twin Cities bakers have stepped up.
By Sharyn Jackson Star Tribune 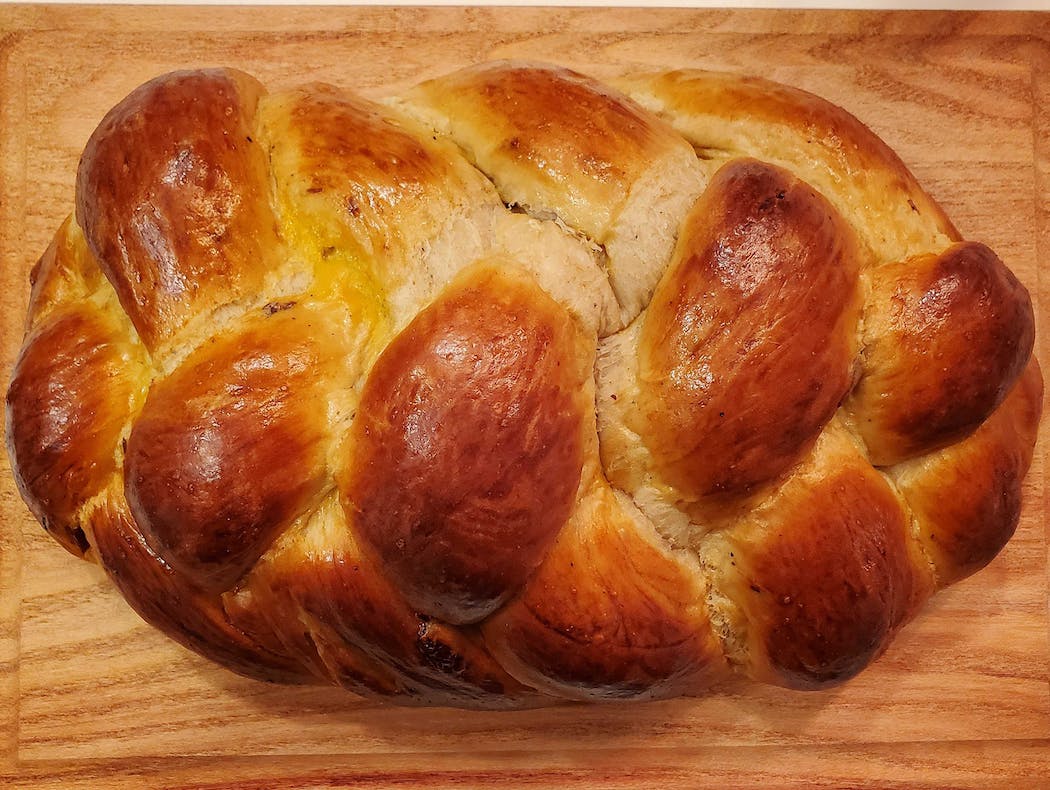 The home baker who sells her challah, the sweet braided bread that accompanies many Jewish families’ weekly Shabbat dinners, had 25 balls of dough rising in her Golden Valley refrigerator when she left for the hospital.

The dough survived, and it wasn’t long before she was back filling orders for her business, Challot By Haley, which she launched at the start of the pandemic after losing her job as an event planner.

“I was devastated losing my job. I was six months pregnant,” Lerner said. “I thought, ‘I have to do something to keep my mind busy and useful. I’ll just bake.’ ”

She started with challah, the quintessential Jewish loaf present at most holiday and sabbath meals. While not specifically linked to Hanukkah, which begins at sundown Dec. 10, many Jewish families will have one on their Shabbat tables during the festival.

Lerner instantly discovered there was a strong demand for challah in the Twin Cities, fueled by social distancing’s disruption of communal rituals. 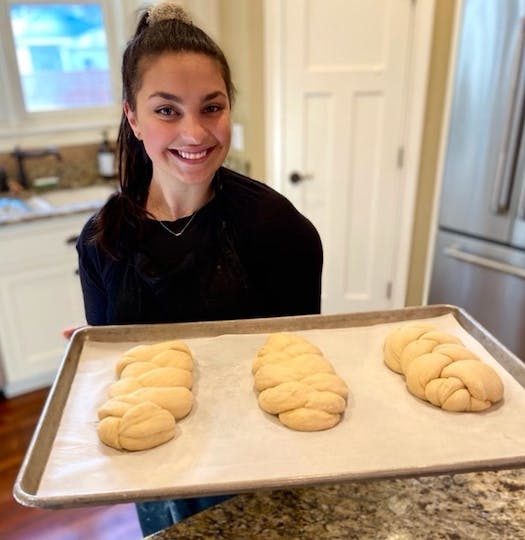 PROVIDED
Morgan Dachis bakes challah from her mother’s Edina kitchen.
“Because we’re not able to be with our community these days, it’s really up to the family unit to foster their sense of Judaism within their home,” she said. “People are leaning into traditions that weren’t necessarily part of their lives before the pandemic, making sure they are part of their lives now.”

Plus, “challah is delicious,” she said. “Who doesn’t want homemade bread?”

Lerner is not the only new supplier of challah in the metro. A number of fledgling food entrepreneurs have discovered that a stretch of unemployment (or parental leave) is as good a time as any to chase culinary dreams. Under Minnesota’s cottage food law, they are launching home-based bakeries, and many of them are featuring challah on their menus.

The 22-year-old lost her job as a lunch server at Manny’s Steakhouse, and filled her time off by baking. She started giving challah to friends and family, and word spread. So, she made it official and launched Morgan’s Broth and Buns (she also sells homemade chicken noodle soup).

She does the baking in her mother’s Edina kitchen, where a big countertop allows her to spread out the dough for braiding.

Dachis grew up with challah on holidays. “On Hanukkah we always do a potluck of dishes, and there’s always challah,” she said. “It’s a fun way to celebrate and bond over food.”

Joanna Biessener is the daughter of Lutheran pastors, but challah was just as big a part of her childhood.

Around age 11, she started baking for the coffee hour at her family’s church. She found a recipe for challah in a cookbook from the 1960s and tried it out. “People loved it and thought it was great,” she said. Challah became a regular part of church.

Until recently, Biessener was the pastry chef at Surly Brewing’s beer hall and restaurant.

Since Surly closed last month, Biessener has teamed up with another out-of-work chef, Elsbeth Young-Haug, formerly of Butcher and the Boar. Together, they are Jojo & Co., and operate from Biessener’s home in south Minneapolis. Chai rum raisin challah was among the first things Biessener put on the menu.

“It’s such a good bread,” she said of challah’s appeal across religions.

For Uriel Lewis, it’s all about the braiding. A stay-at-home dad, Lewis started Uriel’s Bake Shop in his St. Louis Park home about two years ago, and tried a different challah recipe every week until he landed on the perfect technique. “I love playing around with different shapes, a different number of braids.”

For Dachis, a good challah comes down to texture. “It has this pull, this stretchy consistency to it,” she said.

Challah is also versatile. While the classic loaf is usually enriched with eggs and sweetened with sugar or honey, almost anything goes. Biessener has a pumpkin-gingerbread challah, and Lerner offers several varieties, including cinnamon-sugar and garlic-herb. Dachis says her favorite variation is chocolate chip. 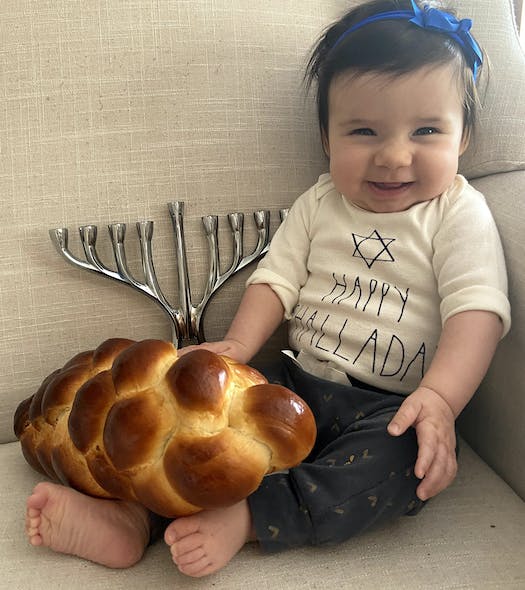 PROVIDED
Haley Lerner makes and sells challah from her home in Golden Valley while caring for her infant daughter, Eliza.

Brick-and-mortar bakeries are also noticing a rise in demand for challah.

John Kraus started selling challah when he opened Patisserie 46 in Minneapolis a decade ago. He lets his dough ferment for three days, “to add subtle nuances of flavors from alcohol fermentation, careful to not let it get too cold or too sour,” he said.

(For a recipe for challah French toast, go to startribune.com/taste.)

Because of the long fermentation, the challah stays fresh for days. But even after it begins to harden, it “makes the best French toast,” Kraus said.

David Fhima, the chef and owner of Fhima’s Minneapolis, recently led a virtual challah-making tutorial for 240 participants. He shared his mother’s recipe, which incorporated caramelized onions.

“If you have a Jewish mother, you better be careful in how you do it and you don’t stray,” he said, laughing.

Fhima operates Mother Dough Bakery from his downtown Minneapolis restaurant, and offers challah on Fridays. All of his breads are naturally fermented with a starter that traces back more than 130 years to his great-grandmother. He hand-kneads every one according to his family recipe.

Also according to tradition, Fhima never slices challah, opting instead to tear off chunks and toss it to the next person.

The first five minutes of every meal is like a game of challah dodge ball around the table, he said.

Many bakeries only offer challah on Fridays, and some require advance orders. Call or check their websites for ordering information.

Note: Challah French toast is an iconic dish that uses up leftover challah after a Friday night Shabbat dinner. Challah lasts awhile, and this recipe works no matter how dry and stale the loaf has become. A thick milk-and-egg batter soaks into the bread so the inside practically becomes custard. Challahs vary greatly in size; use whatever amount of leftover challah you have so each person has about 3 big pieces, and scale down the milk and eggs accordingly. Any milk will work; almond milk is especially delicious in this recipe. Most challah flavors will taste great as French toast; you can try it with sesame seed, raisin or chocolate chip, but you can’t go wrong with a traditional, plain challah. By Sharyn Jackson.

Slice challah into 3/4- to 1-inch-thick slices. If the challah is very wide, cut each slice in half, on an angle. You should have about 12 pieces.

In a baking pan, beat eggs and milk with a fork until incorporated. Add vanilla, cinnamon, brown sugar and salt and beat until pale.

Dip one side of a challah slice in the batter, then flip to the other side and leave it in the pan. Repeat with all pieces of challah, cramming them into the pan. Let the challah rest in the pan until almost all of the batter has soaked into the bread, about 5 minutes. The challah should be very wet all the way through.

While waiting for the bread to soak, melt 1 tablespoon of butter in a nonstick frying pan or flat griddle over medium heat. When sizzle subsides, add as many challah pieces to the pan that can fit without crowding. Cook until brown, about 3 minutes. Flip challah and cook on the other side, an additional 2 to 3 minutes. Repeat with remaining butter and challah.

Keep warm on a plate in a low oven until ready to serve. Top with butter and maple syrup.

sharyn.jackson@startribune.com 612-673-4853 sharynjackson
https://www.startribune.com/twin-cities-bakers-put-their-own-twist-on-challah/573291321/
Back to News
Use left/right arrows to navigate the slideshow or swipe left/right if using a mobile device